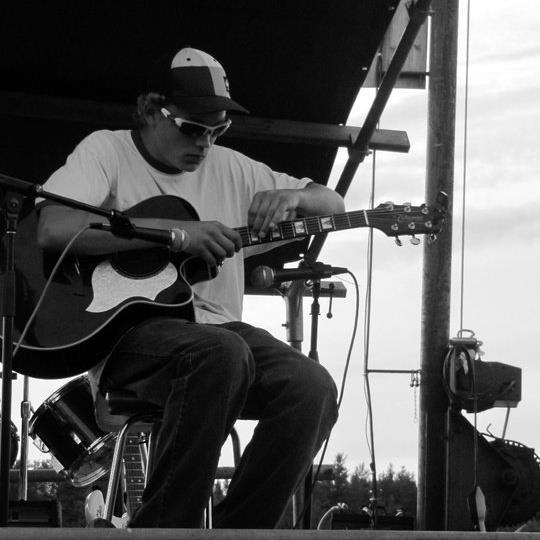 Hi there, and welcome to my Student webpage. My name is Kevin Lovett and I am currently 20 years old, living in Winnipeg, Manitoba, Canada; the city where well known artist such as Steve Bell, Biff Naked and Neil Young (born in Toronto, Canada) really started to begin their careers. I have been a musician for most of my life, starting at the age of eight with the Guitar: Unless you want to go way back in the past when I was two years old, banging the pots and pans in the kitchen with my Mother's wooden spoons!
I took guitar lessons for four or five years until my teacher started to encourage me to find an instructor who could really challenge me. So I decided to just teach myself, and learn new instruments. Over the years until grade 8 I was a guitarist in the church bands I was a part of in my home town of Kenora, Ontario; where I'd practice on Wednesdays with the band, and perform on Sundays during services. During this time, in grade 7 (12y.o) I began to learn drums, and quickly adapted to the instrument, to become the new fine arts jazz band drummer on the first day of practice. From then on, I was the drummer for several rock bands, jazz bands, pits bands, concert bands, and even Aboriginal Pow-Wows which was quite an honour since this rarely occurs in my neck of the woods of North-Western Ontario, as I myself am Non-Aboriginal. As years went on I started to pick up knowledge on other instruments such as: bass guitar, piano, harmonica, ukulele, banjo, and bouzouki.
I began to record when I was 13 at home when I asked for a Tascam DP-02 for my big christmas gift. For two years I spent looking at the thing, scratching my head on how to use it. It spent a lot of time collecting dust, until one day I had an epiphany after reading the manual backwards and forwards. I started to get the idea of gain structure and arming tracks, overdubs/punch-ins, and what not. When I was 17, I was a part of a co-op course between high schools in Kenora. Half the day was spent doing math and english at my high school, the other half was spent apprenticing as a recording engineer in the music studio that was set up at the Catholic High School in my home town where I was to record myself and other students. At the time we had 16 available inputs, and we ran logic pro 8. The school had a midi room with several iMacs and midi controllers, all linked to a time capsule for easy share across the music department. Finally during my senior year after returning from my exchange trip in Japan during grade 11, I decided I wanted to move on in life so I decided to get enrolled in Rothesay Netherwood Private School in Rothesay, New Brunswick, Canada. At this school I was given the opportunity to be the Music Prefect (as all grade 12's had been given responsibilities over student departments of the school). I helped the student prefects who set up monthly coffee houses, which I performed several times in, during every show, and also volunteered my spare time giving guitar and drum lessons to many interested students, organizing and leading the pit band/jazz band along side the music instructor of the school, R. Kidd. The Following year I went onto study Recording Engineering at Ontario Institute of Audio Recording Technology. I lasted the first semester, but had to leave before the second started due to my average not being high enough. When I landed back in Winnipeg, My mother and I drove to Mid-Ocean School of Media Arts where I met my future instructor Carlos.

During the fall of 2012, I moved to Winnipeg and became a DJ at the Thirsty Lion Tavern, while I attended MOSMA as a full-time student in the Audio in Media program, and received my diploma as an audio technician.  My Friend and I started debating on what we were going to do next, so we looked online, and came across Recording Radio Film Connection. I told my mom about it, she thought it was too good to be true, but sure enough both myself, and Max, a buddy I graduated with, applied to the Masters Program at RRFC, where we were both introduced to Mix Master Lenard Milne at Bedside Studios, where he happens to have the best sounding drum room in Winnipeg City! The room is completely oblique, 0 parallel reflective surfaces, made of beautifully treated woods. It's also very large, measuring around 30-30 feet diagonally which makes it great for its own natural reverb. I've been having a blast so far with the program, and I just started!

Today was my final day working at Bedside. it was a really great year working with Len and I learned/obtained so much information... Read More >>

Well Today I finished my album and I'm ecstatic with the final product, it sounds amazing and it's everything I ever wanted... Read More >>