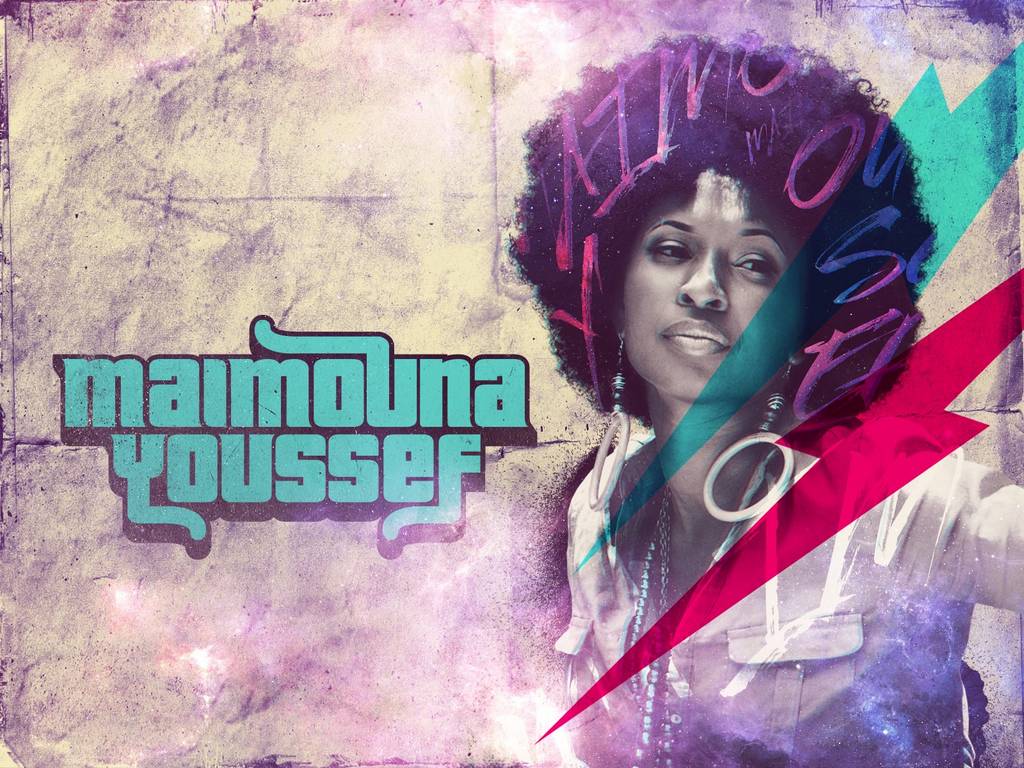 Maimouna has rocked the stages of many renowned venues such as Denver Colorado’s Red Rocks Amphitheater, New York City’s Legendary Carnegie Hall, Radio City Music Hall, The Kennedy Center, & Carter Barron Amphitheater, in Washington DC as well as national and international festivals and venues such as Switzerland’s Montreux Jazz Festival, South Africa’s Cape Town Jazz Festival, the legendary New Africa Shrine in Lagos, Nigeria, Art of Cool Festival in Durham NC, The Capital Jazz Cruise, The Grammys Festival At Sea, and Beverly Bond’s Black Girls Rock! In 2016 she was elected to serve as a governor for the DC chapter of the Recording Academy’s Grammy Board.

As a youth, the Baltimore native made a name for herself locally first in her family’s afro-Native vocal trio Three Generations,  then with her own jazz/hip-hop/funk/ band known as Cirius B. They released their first live band album “Subversive Activity” in 2004. That album caught the attention of Grammy Award Winning producer, James Poyser, of The Soul Aquarians. Shortly after signing with with Sony Music, Maimouna earned her stripes as a world-class vocalist and emcee while touring with The Legendary Roots crew. Her musical endeavors were a springboard for her big screen debut in Dave Chapelle’s hip hop documentary “Block Party.”

She released her first Solo EP, \'Black Magic Woman,\' independently in March of 2011, and her highly anticipated and widely praised first full length solo album, \'The Blooming,\' in September of the same year. Maimouna\'s 2014 project, “The Reintroduction of Mumu Fresh,” showcased her sharp rhyming skills as an emcee and her strong commitment to providing a balanced perspective on current social, racial, political, gender and class issues. In 2016 Maimouna recorded a full-length project with Grammy Award Winning producer 9th Wonder and The Soul Council scheduled to be released in 2017. She is currently finishing her 3rd studio album which will feature heavy hitter producers such as Jay Cole’s touring dj and producer, DJ Dummy, hitman Chucky Thompson, Rapper/Actor Common and Afro beat Legend Femi Kuti among others.

Youssef’s unparalleled songwriting skills make her a force to be reckoned with. She’s written songs for Walt Disney High School Musical’s own Vanessa Hudgins, and Common among others. Youssef’s 2011 original release, “I got a man” produced by Dj Jazzy Jeff, was selected by BET as the theme song for their original movie “Being Mary Jane” Starring Gabrielle Union. She also contributed as a writer and a singer on grammy award winning DJ jazzy Jeff’s Playlist album “Chasing Goosebumps”.

Youssef is not just your typical stage performer. She facilitates workshops at conferences and learning institutions for youth on varying topics ranging from social justice through art, innovative education, vocal technique, ear training and songwriting to find one’s own unique sound. In November 2011, Maimouna was awarded the title of “Artist of The Year”, by the Washington DC based non-profit organization One Common Unity for her dedication and commitment to empowering underserved youth.

Maimouna\'s live performance takes you on a thrill ride through her many musical influences, spanning the far reaches of rock, jazz, vintage  and acoustic soul, R&B, and rugged hip hop. Whether accompanied by acapella vocals only or her three-to-eleven-piece band, her magnetic charm, electrifying stage presence, and uniquely timeless vocal styling, proves that she has the staying power of a born-star and is guaranteed to convert any non-believer.

So far so good. Ive been learning a lot. Some of the information I was familiar with but didnt fully understand all the inner workings... Read More >>

Ive only been in school one week but so far so good. I was already familiar with some of the information from just being in the studio environment recording my own albums but now that Im looking to become an audio engineer, the text in chapter one gave me a more indepth understanding of it all... Read More >>