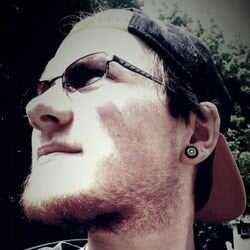 The name's Chris Bullock, 21 years old from West Chester, PA. I love music more than anything, whether it be hip hop to classic rock to bluegrass. I've been playing guitar for around 10 years and drums since the 4th grade. I dable with piano and I also write and sing. I currently use Logic Pro 9, ProTools 11, and Maschine for recording my music.

I went to West Chester East High School and graduated in 2011. Most of the classes I took were your average high school classes as well as a music theory class and a keyboard class. My intro to playing music was like I said in 4th grade, that's when I joined the school band. I was a percussionist so I played all different kinds of drums. I went on in the band until 8th grade, we won first place at the Hershey Park music tournament that year, (if you wanna call it that). A little later on in my life, I was about 16, was my first real recording session. My buddy Alex Saddic; who is the lead singer and guitar player from a local West Chester band called "The GoAround", was nice enough to invite me and the dude I was playing music with at the time to come over and record a song. We all jammed on it for a few hours and we ended up with an actually pretty good sounding song, drums and everything. Alex used Logic Pro 9, and he was the first person to introduce me to Logic and show me how cool, (and expensive), it was. Then one very lucky Christmas my parents got me Logic and a MacBook so I could learn it and record with it. Everything I know about Logic Pro 9 is self taught or learned from YouTube, and the knowledge I have from Logic really translated well learning ProTools.

Fastforward three years. I'm 19, no longer in a band, and looking for something new musically. I stumbled upon a few videos showcasing this new equipment called Maschine. Now, I've never seen anything like this before so I was definitely impressed with how user friendly it looked, not to mention the songs that were being demoed were pretty impressive. So I saved up and bought Maschine Mikro which is the same thing as Maschine, just a lot cheaper and missing a few knobs. As with Logic, I also taught myself how to use Maschine, the software and the equipment. The software took a little while to become familiar with since it's layed out in whats called "scenes" as opposed to being able to just hit record and play like in Logic and ProTools. But after messing with it for a while I became very familiar with the software. The equipment is still throwing surprises at me that I didn't know it was capable of doing, like duplicating a sample to certain pads and not having to copy and paste the samples instead. Maschine is my outing for my hip-hop first and foremost, but I also really want to take a shot at techno to see what it's like to make that kind of music. I also want to learn dubstep, (kinda), just for fun.

My hobbies outside of music are playing video games, skateboarding, cooking, watching movies, normal 21 year old stuff. I've been playing games since the original NES came out forever ago. It was just nice to be able to dive into a completly different world and either fight someone in the old wrestling games or venture around Hyrule trying to stop Ganondorf. Skateboarding has also been a part of my life since I was little. I had a little bit of a hiatus with skating but I've picked it back up heavily these past few months. Skating the mini ramp has become my all time favorite thing to do when I skate, besides bombing hills! Cooking is the relatively new hobby I picked up about 2 years ago or so. Peppermill was where I honed a lot of what I know now, and PJ's in Downingtown definitely has helped a lot to just by exposing me to different foods that Peppermill doesn't carry.

Writing, recording and listening to music is what I love. It's why I want to make music too, so I can share my love with others and get them as addicted as I am. After going through this program, interacting with people like Joey Heier (my mentor), learning everything I now know in ProTools, and audio for that matter, I am confident that this is my calling and this is what I was meant to do. I hope everyone can enjoy my music as much as I enjoy creating it, and I hope to make as many friends as possible on the road ahead!

The final chapter. I honestly can't believe I'm already at this part of the course. It seems like yesterday I was going through orientation and now I'm writing this blog post about the mastering lesson and preparing for the final... Read More >>